Last Game of the Season: Campbell vs. Waianae

The Close Game Ended with an Unexpected Loss 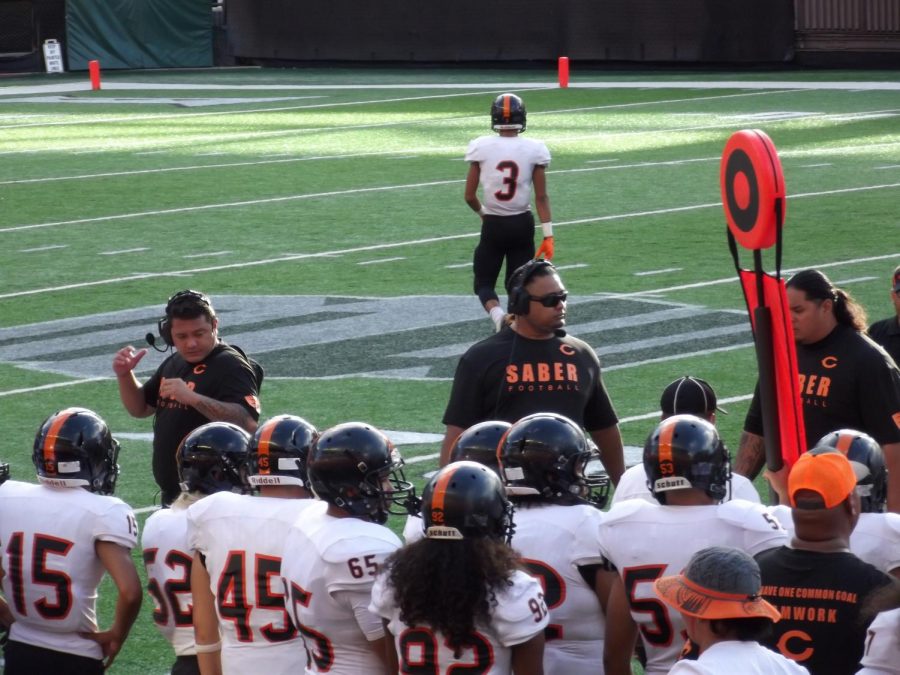 The day was November 4, 2017. The heat radiating from the game between Campbell and Waianae at Aloha Stadium during the first and second quarter was fierce. Waianae was leading with a score of 13, while Campbell remained with 0 points; continuously making adjustments Campbell attempted to figuring out the game. Cheers were getting louder on both sides as people supported their home team.

The crowd was wild and full of energy as it reached the end of the game. Campbell tied the game and went overtime, despite fighting until the end they eventually lost their last game of the season with the score of 21 to 29.

“I don’t feel so good because we lost, but I think that the players kind of learned what we were talking about in terms of playing every snap and every down like it’s your last,” said William Wilkinson, an English teacher in James Campbell High School (JCHS). He was hired as a new coach for the JCHS football team this year. Previous to this, he had been in the military for 30 years. Wilkinson retired with the realization that he always wanted to teach and coach.

One of Wilkinson’s concerns for the athletes was their academics. “This is the first year for the staff, and I think we made strives with the student-athletes, not only with the football field but hopefully in the classroom as well,” said Wilkinson.

According to Gabriel Colon Valentin, a senior, “Mr. Wilkinson is a motivator, he makes sure we have our priorities straight even outside of football.” Valentin played junior varsity (JV) football for 2 years in high school; this year, he is currently a receiver on the varsity team.

“He would make sure that we are doing the job that we’re supposed to be doing,” said Valentin.

They begin preparing for the football season during the summer. “We do some conditioning beforehand. We have individual drills; we work on techniques and speeds, and we get together. There’s offense and defense to practice our plays and schemes, and we practice against one another to make sure those schemes are solid,” said Wilkinson.

Coach Wilkinson drilled it importance of mall passing and focus into his athletes. “He would make us catch the ball overhead and make sure we focus on the ball. He would deliver the ball in a different way, then he would try to work on locating the ball,” said Valentin. They have to maintain their focus, especially during the game, because it is an important role to be able to win.

“We did lose but it was a good experience to have. We were able to do it together, we still have our bond, and it’s not going to break us apart,” said Valentin. It is not always about winning, it is also important to learn and to keep moving forward.