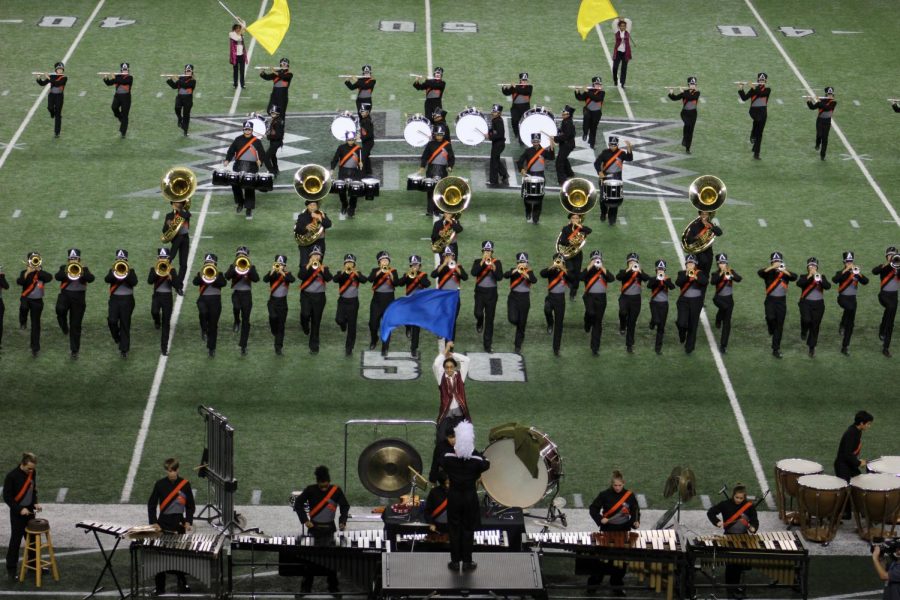 Four buses, full of Sabers, headed towards the 38th Annual Rainbow Invitational Marching Band Festival on Thursday, November 9. Unbeknownst to them it would be their last competition of the year. Sleeping, playing games, telling jokes on the bus, they continued their usual rituals before competitions. They sat in the bleachers at the Aloha Stadium for hours, watching the performances of the other schools, waiting for their turn to perform.

Each year the James Campbell High School (JCHS) Marching Band participates in five competitions, which they started preparing for during summer vacation. They learned their march in sets. Each instrument has a different set to learn in order for the entire band to make the image they set out to create. “We just rehearse it over and over again, and memorize it. After we add everything together we go on the field and perform,” Swizardy Baes, a senior and marching band member, said. They practice during weekends and before competitions so the sets are still fresh in their minds. The sets are created by the new band teachers Armando Langaman and Gregg Akamine.

After arriving at the competitions the section leaders try to give the other band members a pep talk to calm everyone’s nerves. “Once we get to where we’re performing there’s always a lot of time. Because we have a lot of time to do something we talk as a section,” said Cailee Andres, a senior and the flute section leader.

Each performance is scored in six categories–music, marching, percussion, drum major, color guard, and general effect—then an overall score is given. The overall score is shown as either fair, good, excellent, or superior. On a four point scale fair would be a one, good would be a two, and so on.

Once all the competitions are over the marching band has one final party which usually ends around two in the morning; this year unfortunately the last performance at Kapolei High School was cancelled due to the rain so their party didn’t last as long. The seniors were still able to say their final goodbyes to the marching band though. “Marching band is my family; I don’t get to spend a lot of time with the parents so on most days I end up leaving here after seven. They’re my family,” said Arlene Argel, a senior and marching band officer.

The seniors finished off their marching band careers by retiring their shoes and giving thank you speeches to the entire band. Though they have retired from marching band with Christmas lights on their backs, they can continue to play music with their band family for the remainder of the year. Even though marching band season is over, jazz and symphonic band season has only just begun.